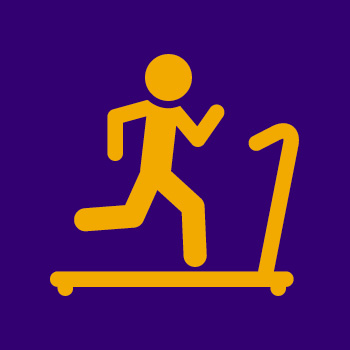 Endurance exercise is an important treatment for people with Parkinson’s disease, but it remains unknown if high-intensity or moderate-intensity exercise is more effective in slowing the progression of the disease.

Researchers at Wilfrid Laurier University are collaborating on a new Phase 3, multi-site clinical research trial to test if high-intensity treadmill exercise is more effective in decreasing the signs of Parkinson's disease in individuals who have not initiated medication for Parkinson’s. This is the first time high-intensity endurance exercise is being studied across a large number of sites in both the U.S. and Canada, and in a diverse population.

The trial, called SPARX3, will be led by researchers at Northwestern University in Evanston, Illinois. Laurier’s Movement Disorders Research and Rehabilitation Centre will be one of 29 research sites across North America, and one of only two in Canada. Researchers will enroll 370 participants diagnosed with Parkinson’s, age 40 to 80, randomly assigned to either moderate-intensity or high-intensity exercise treadmill training. They will exercise for 18 months, four times a week for 30 minutes under close supervision, and then be followed for another six months.

“We are delighted that Laurier is the largest recruitment site, responsible for nearly 20 per cent of all recruitment in this multi-site trial,” says Quincy Almeida, director of the Movement Disorders Research and Rehabilitation Centre. “We are thrilled that exercise is being recognized as an important therapy for Parkinson’s disease.”

The signs and symptoms of Parkinson’s disease include progressive loss of muscle control, trembling, stiffness, slowness and impaired balance. As the disease progresses, it may become difficult to walk, talk and complete simple tasks.

The SPARX3 trial will investigate whether endurance exercise: influences the loss of signals from the brain cells that degenerate in Parkinson's disease; increases brain-derived neurotrophic factors, which are a family of proteins that induce the survival, development and function of neurons and are important for neuronal health; and reduces inflammation, which is known to be elevated in Parkinson's disease.

The research team will also collect genetic information on the participants in order to determine potential reasons some people respond better to exercise than others.