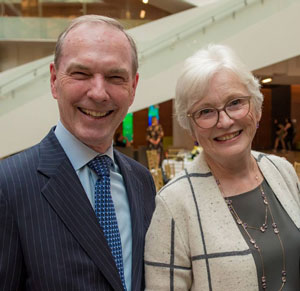 Waterloo – Two long-time Wilfrid Laurier University supporters have made a generous commitment to Laurier’s Making Space for Music fundraising campaign in order to help name a series of practice studios after Glen Carruthers, who recently retired after a 10-year tenure as dean of the Faculty of Music.

Robert (LLD '96) and Judith (BA '87) Astley have offered up to $375,000 to match every donation, dollar-for-dollar, made toward the Carruthers Practice Studios starting on Giving Tuesday, Dec. 1 (contingent on the building construction beginning by July 31, 2022). All funds donated to the studios will go toward Laurier's ongoing Making Space for Music capital campaign to support the building in which the Carruthers Practice Studios will be situated.

The Making Space for Music campaign is raising funds to expand and renovate the Faculty of Music building on the Waterloo campus. As part of the campaign, the university will build a series of high-quality, light-filled practice and rehearsal rooms with superb acoustics, floor-to-ceiling windows and a view onto University Avenue.

“At Laurier, we are exceptionally fortunate to have champions like Bob and Judy. It is because of their generosity and leadership our music students will have inspiring practice spaces and Glen will be recognized for his significant contributions to the Faculty of Music and the university,” said Deborah MacLatchy, president and vice-chancellor. “I want to thank the Astleys for their exceptional and continued support of the university.”

“Laurier nurtures remarkably talented and dedicated students who impact communities close to home and worldwide,” said Anna Ferenc, acting dean of the Faculty of Music. “We are deeply grateful to Robert and Judith Astley for their generosity, which will help greatly to provide practice facilities worthy of our students’ potential.”

The Making Space for Music campaign aims to raise $15 million to renovate and expand Laurier's Waterloo campus Faculty of Music building, transforming it into an improved space for teaching, practicing, rehearsing and performing. An exceptional new campus entranceway, lobby and practice rooms will allow increased opportunities for music students to develop their craft and for the public to enjoy and participate in Faculty of Music programming.

Credited for inspiring the vision behind the campaign, Carruthers is also being recognized for his leadership and commitment to the faculty and its students.

“Glen’s genuine and inspiring leadership during his time as dean has been evident to all,” said Robert. “We are honoured to support the Carruthers Practice Studios in recognition of his vision,” added Judith.

“Laurier supporters are absolutely vital in moving this project forward, and this generous gift from Bob and Judy takes us a step closer to the finish line,” said Jason Coolman, vice-president: advancement and external relations. “I invite our friends and supporters to help honour Dr. Glen Carruthers by donating to the Carruthers Practice Studios and the Making Space for Music campaign.”

Read more about the Making Space for Music campaign.