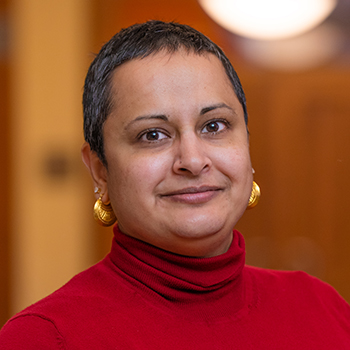 As a minority within a Muslim minority population, sexually and gender-diverse Muslims living in Canada tend to experience dual discrimination from the larger LGBTQ+ and Muslim communities. Maryam Khan, assistant professor in Wilfrid Laurier University’s Faculty of Social Work and a queer Muslim woman herself, is dedicating her research to improving their access to health and social services, and relations with their families. Khan was recently awarded the 2021 Emerging Community-Based Researcher Award by Community-Based Research (CBR) Canada for her efforts.

Khan will commit her $1,000 grant from CBR Canada to her ongoing research collaborations with Salaam Canada, a non-profit support group serving sexually and gender-diverse Muslims. Khan is leading two projects, both funded by the Social Sciences and Humanities Research Council of Canada. One aims to support family reconciliation and to promote an understanding between sexually and gender-diverse Muslims and their families, and the other will document how health-care and social service providers can treat this population in culturally relevant ways.

“Maryam has been a genuine asset to our community, and her dedication to action-focused research has helped us address long-standing issues in meaningful, healing and transformative ways,” says Sarah Shah, core volunteer organizer at Salaam Canada.

We asked Khan to reflect on her approach to community-based research and her personal connections to her work.

What inspired you to focus your research on sexually and gender-diverse Muslims and their families?

MK: “As a frontline social worker, I worked primarily with queer youth. A lot of our work involved trying to include their families of origin in our conversations. Muslim families were commonly seen as inherently homophobic and transphobic, so they often weren’t invited to participate in these kinds of conversations. But service users didn't really understand what it was that their families were actually rejecting. Was it them or was it the path that they were going to end up walking with a lot of discrimination?

“That is one of the things that we are trying to understand and explore: the responses of Muslim families to their sexually and gender-diverse kin. We are hoping to look at the continuum of acceptance, support and rejection. I wonder if there is a way to account for something that may look like rejection but may not be, because Islam is not inherently homophobic and transphobic.”

Broadly speaking, can you identify specific reasons why Muslim families seem to struggle with accepting gender and sexual differences?

“In North America, Islam is often constructed as the complete opposite of Western society. Muslim families face pressure to raise their children in a way that they are going to be successful in their communities of belonging, while also living in Western society. It’s been well-documented that queer Muslims are often accused of being 'too Western’ by their families because being queer is seen as somehow Western. A lot of family members contact Salaam Canada and ask, ‘How do I support my child? I don’t know what this ‘gay’ is. Help me understand.’ There’s not the same resource capital that may exist for people of Christian or Jewish traditions.”

So in some instances, “rejection” may actually be misplaced concern?

MK: “Yes. For example, I grew up in Scarborough because my parents didn't want us to experience a lot of the racism that they experienced when they first came to Canada. They thought, ‘If we stick close within our community, it will be much easier.’ We see this a lot within immigrant communities. Often when parents are rejecting their child, they are rejecting them because they don't want them to suffer, because this world is harsh. Especially if you are racialized, if you are non-Christian, or if you embody queerness in a way that is against the norm, you are going to face a lot of challenges.”

You are also working with Salaam Canada to help health-care providers engage with queer Muslims in culturally relevant ways. Why is that a priority?

MK: “There is a lot of great research that speaks to the discrimination that queer folks face in health care and social services. When you add the intersectional identity of being Muslim, it adds a different layer. Within social service provision, there isn’t much understanding of the issues and health needs of sexually and gender-diverse Muslims, so often their health needs are not met. They end up educating providers about who they are and feel exoticized and then think, ‘Well, this is not what I came in for.’”

You have a long history as an activist. How does that inform your approach to community-based research?

MK: “Being a member of the queer Muslim community is important because I'm very much invested in its longevity. I'm not going to come in and exploit it and then just disappear and build my career. But there is a divide between the activist and academic communities because academia has a long history of engaging with marginalized communities in ways that are harmful and extractive. So it’s very challenging for me to be an activist and an academic at the same time. Sometimes in academic circles, they don't validate my work because they say, ‘You're spending your time with the community, not publishing in A-list journals.’ Then I hear from the activist community, ‘You are so privileged that you're not one of us anymore.’ I'm trying to live and be authentic to myself and to the communities that I work with. It’s a good challenge that I'm embracing.”

How does it feel to win this award?

MK: “It's really nice to be validated because, like many people who are trying to make social and policy change, often my work goes unacknowledged. I am so grateful and honoured to have my research recognized. This is my life. This is part of who I am, so to get that official recognition is very humbling. It lets people know that this work is important and validates my community.”