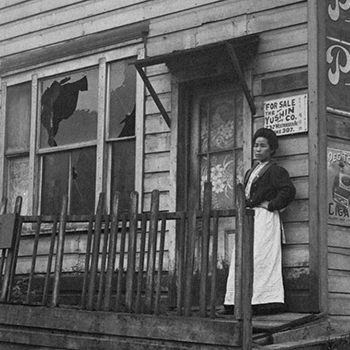 “History should be more than just celebrations of nation-building. It is important for people to know the complicated and complex roots of the country, warts and all.” – Barrington Walker

On Sept. 7, 1907, thousands of people gathered in front of Vancouver’s city hall to protest against Asian immigration to Canada. Holding signs with slogans such as “For a White Canada,” the protestors, led by members of the newly formed Asiatic Exclusion League, stormed into the city’s Chinatown neighbourhood and began rioting. Chinese-owned businesses and homes were gravely damaged, then the crowd moved onto an area of Vancouver heavily populated by Japanese immigrants. Violence ensued and the destruction continued for two days.

More than 100 years after these racist riots, racial tensions remain a persistent strain on Canadian life. Though much progress has been made and Canada maintains an official commitment to multiculturalism, little-known incidents such as the 1907 riots can illustrate how our history informs our present.

“There are certain flashpoints in the current moment – say with the ongoing pandemic – when some people are stunned by the ferocity with which anti-Asian sentiments shoot back up to the surface,” says Barrington Walker, a professor in Wilfrid Laurier University’s Department of History and the associate vice-president: equity, diversity and inclusion. His research focuses on the histories of Blacks, race immigration and the law in Canada.

“In terms of historical time, these riots weren’t that long ago,” says Walker. “We have a narrative about Canada that comes out of the Underground Railroad and morphs into multiculturalism, and a lot of stories like this one are easily and purposely forgotten.”

Prior to 1907, anti-Asian hostility had been building along the west coast of North America for many years.

“A lot of the discontent was based in economic competition and the idea that Asians would work for low wages,” says Walker.

Canada’s railroad companies relied heavily on cheap Chinese labour to build the Canadian Pacific Railway in the late 1800s. Following its completion, labour unions in British Columbia barred Chinese men from joining, fearing that association with Chinese labourers would compromise their bargaining power. Japanese and South Asian people, thousands of whom came to British Columbia between 1877 and 1907, were similarly discriminated against by their white working-class peers, a division that was encouraged by corporate leaders.

“Often elites will stoke up antagonism amongst members of the working class in order to serve the interests of capital,” says Walker. “There is a kind of zero-sum argument that is put forward: if one segment of the working class is doing well, then another segment is not going to do as well. This fear-mongering is used to keep workers from organizing and recognizing their common class interests.”

Coupled with popular stereotypes of Asian people at the time – such as fears that Chinese men would seduce white women and sell them into sexual slavery, primarily through addiction to opium – working-class white people were unmotivated to challenge a system that gave them power over Asian workers.

“We see certain groups defining themselves by who they are not because there is a kind of psychological wage or compensation that is often more important than money,” says Walker. “Then politicians come along who tell them, ‘I might not be able to bring your jobs back or get you decent health care or make sure your kids are educated, but I can make sure you maintain your status in the racial hierarchy by ensuring that other groups stay down.’”

That breed of populist politics was alive and well in 1907. British Columbia introduced a Chinese Head Tax in 1885 to restrict immigration, Asians were prohibited from being employed by public works projects or holding logging licenses, and the Asiatic Exclusion League included Vancouver’s mayor and several city councillors as founding members.

The recent resurgence of populist leaders suggests that today’s voters may be similarly drawn to divisive politics.

“There is no doubt that politicians of a particular ilk will stoke those divisions for their own benefits,” says Walker. “The past four years or so, we have seen that current running quite strongly in North America and Europe, and I think it’s important to pay attention to the underlying reasons why these sorts of messages are well received in certain populations. The new political order has largely left people to fend for themselves and what they’ve offered working-class people instead is a sort of threadbare nationalism.”

Walker can point to many markers of Canada’s progress on racial equality since the window-shattering violence of 1907, but the parallels he draws to today’s social and political climate reinforce the value of his research and Canada History Week.

“My research is about the relationship between the past and the present,” he says. “It’s not about just digging up unpleasant stories about Canada; it’s about challenging a certain notion of our historical innocence. I don’t think we can have a full understanding of the experiences of many people then and even now if we have no knowledge of these kinds of histories. If you are going to talk about national formation, this has to be part of the story.”