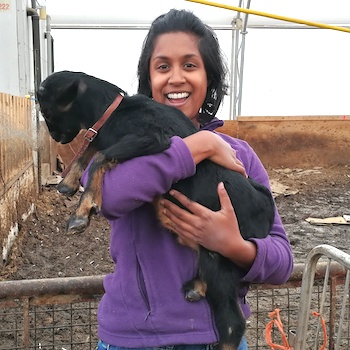 For generations, people in the Northwest Territories community of Kakisa, home of the Ka’a’gee Tu First Nation, have depended on the land for their food, health and well-being. Today, climate change is having a profound impact on the land, waters and animals, making it harder and sometimes less safe for residents to obtain food from the land.

Neomi Jayaratne, a Wilfrid Laurier University first-year master’s student in environmental studies, is working with the community to help monitor the land so residents can continue to hunt and gather food safely and efficiently. A video Jayaratne created about her work recently won third place in a Polar Knowledge Canada contest, which earned her a $1,000 prize.

“People in Kakisa have traditional routes they use when they go hunting, but with permafrost thawing and changes in when and where ice freezes, everything is becoming more unpredictable,” says Jayaratne. “They’re not always sure what parts of the lake are frozen and whether they can snowmobile on it, and it changes from year to year so there’s a higher risk to going out on the land.”

Although Jayaratne is in the early stages of her own research, she spent two months in Kakisa last summer building relationships and assisting with the food security research of one of her supervisors, Adjunct Professor Andrew Spring.

Jayaratne is no stranger to food issues, nor to the North. Her interest in food sustainability was sparked in 2009 when, as a McMaster University undergraduate student, she went on exchange to New Zealand and spent some time on a sheep farm. Since then, she has frequently combined travel and volunteer work on farms.

“From those experiences, I started realizing how much work it actually takes to produce our food and the challenges and benefits of farming,” says Jayaratne, who is also co-supervised by Associate Professor Colin Robertson.

After completing a bachelor’s degree in music with a minor in geographical information systems (GIS), then a post-graduate certificate in GIS and cartography, and another in food security, Jayaratne moved to Yellowknife in 2012. There, she worked as a drafter for a surveying company and later as the manager of the Yellowknife Farmers Market.

Jayaratne still considers Yellowknife home and plans to make the city her base while she’s completing the second year of her master’s degree. She will return with new understanding of the disparate food security challenges facing different northern communities.

“People in Kakisa have traditional routes they use when they go hunting, but with permafrost thawing and changes in when and where ice freezes, everything is becoming more unpredictable.”

In Yellowknife, Jayaratne mostly bought her food in grocery stores. In Kakisa, there are no places to buy food, so community members travel to Fort Providence or Hay River, both roughly an hour away. This adds a great deal of expense both in gas – in a place where gas is expensive – and time. The rest of the community’s food comes from hunting, fishing and gathering, with some supplementation from a small community garden started only a few years ago.

In addition to environmental conditions changing rapidly, some in Kakisa worry about traditional knowledge not being transferred to the youth.

“People are constantly gathering knowledge from the land and observing what’s happening,” says Jayaratne. “These observations and knowledge should be passed down to the younger generations. This is a very important part of the culture, but these days, there are so many obstacles to spending time on the land.”

To address this, the Ka’a’gee Tu First Nation holds community hunts and on-the-land camps, often in partnership with Laurier, to share knowledge between generations.

“We need to understand what’s changing and to be able to monitor these changes, so the community can plan when and how they’re going out on the land.”

Jayaratne is planning to return to Kakisa this summer and hopes to use her mapping skills to help community members combine traditional knowledge with digital technology. Previous researchers started creating an online mapping resource that includes photos and stories gathered from the community, but more work needs to be done to bring it into use.

“The community wants to see this resource develop and become the centrepiece of community-based monitoring initiatives, as well as become an educational resource for the community,” says Spring, who developed the Ka’a’gee Tu Atlas project with the community a few years ago.

“My overall goal is to help the community monitor the land in a more practical and efficient way,” says Jayaratne. “We need to understand what’s changing and to be able to monitor these changes, so the community can plan when and how they’re going out on the land.”