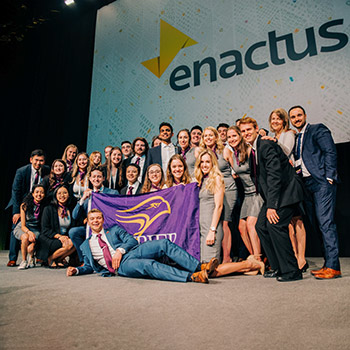 It’s been a long time coming.

Members of Wilfrid Laurier University’s Enactus club recently returned to the finalists’ podium at the annual Enactus Canada National Exposition on the strength of their venture EarthSuds, an environmentally friendly alternative to small plastic toiletry containers widely used in the hotel and travel industries.

The Enactus Canada National Exposition – a live, presentation-based competition – brings together student, academic and industry leaders from across Canada to celebrate the achievements of students who are shaping a better, more sustainable world through entrepreneurial action. The 2019 competition was held during May in Vancouver.

Laurier’s Enactus team placed in the top four overall among teams from 69 Canadian colleges and universities. The top-four finish allows the team to compete for up to $10,000 in seed funding from the John Dobson Foundation, a long-time supporter of Enactus Canada. A Laurier team last competed at nationals in 2008.

“You need grit and the ability to pivot and not give up when you experience failure. That is fundamental to running a business with a social impact and generating revenue that can be used to make the world a better place.”

EarthSuds products include dissolvable, single-use shampoo, conditioner and body wash tablets. When crushed and exposed to water, EarthSuds’ tablets lather as well as any bottled product and don’t add unrecyclable plastic containers to landfills and waterways.

Passionate about the environment, Business Administration student Marissa Vettoretti brought the idea for EarthSuds to Enactus Laurier in fall 2017. During the past two years, the Enactus team helped Vettoretti enhance a product prototype, secure funding and build relationships in the hotel industry.

In May, the Inn of Waterloo piloted EarthSuds products in 10 guest rooms. Vettoretti and teammates are currently working through feedback collected as part of the pilot. A second pilot launched June 1 at the Beverley Hotel in Toronto.

Vettoretti says involvement with Laurier Enactus has taught her about business and the real-world skills she will need to make EarthSuds impactful and profitable.

“You need grit and the ability to pivot and not give up when you experience failure,” says Vettoretti. “That is fundamental to running a business with a social impact and generating revenue that can be used to make the world a better place.”

More than half of Laurier Enactus’ 90 student members have contributed to EarthSuds’ growth during the last two years, with Vettoretti and co-manager Daniel Moll leading the enterprise’s core team of 15. Student representatives from EarthSuds, the Laurier Enactus executive team and Mighty Hawks attended the national exposition.

“To finish in the top four among well-established and highly profitable ventures speaks to the capability of our students, their drive and the venture’s potential.”

Laura Allan, an assistant professor in the Lazaridis School of Business and Economics and Laurier Enactus Waterloo campus faculty advisor, says the team’s performance reflects the talent, creativity and dedication of its members.

“To finish in the top four among well-established and highly profitable ventures speaks to the capability of our students, their drive and the venture’s potential,” says Allan. “They have done an amazing job in a short amount of time. I’m so proud of them.”

The entrepreneurial spirit of individual Laurier Enactus team members was also recognized at the national exposition. Vettoretti received an HSBC Women in Leadership Award and Jake Fell, co-president of Laurier Enactus, was named Enactus Canada’s Student Leader of the Year.

Team members were also successful in two additional challenges at the national exposition. They were runners up in the Co-operators Youth Mental Health Project Accelerator Best Project competition and second runners up in the TD Entrepreneurship Challenge.

Last summer, Laurier Enactus led the branding of Hawk Honey, honey harvested from Laurier’s Waterloo campus apiaries. Other ventures supported through Laurier Enactus include Shredded, which repurposes textiles for pillow filler, and PolliNation, a hands-on education campaign to inspire youth to protect pollinators and learn about entrepreneurship through building and selling bee hotels.

Laurier Enactus operates out of the Schlegel Centre for Entrepreneurship and Social Innovation at Laurier’s Waterloo campus and is open to students in all programs.

Learn more about social innovation and entrepreneurship at Laurier.