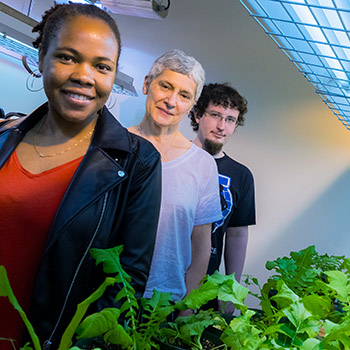 Everyone knows you can’t get blood from a stone. But Wilfrid Laurier University Professor Frédérique Guinel and her graduate students have been finding that a particular kind of rock can help produce healthier plants – at least sometimes.

Guinel and her students have been working with industrial partners, notably Boreal Agrominerals Inc., to test whether Spanish River carbonatite (SRC), an ancient volcanic rock quarried near Sudbury, can work as a natural fertilizer. The rock contains a mix of minerals including potassium and phosphorous, two of the main components of chemical fertilizers.

“You don’t think of a rock being able to provide nutrients to plants, but in the research we’re doing here, we’re seeing that plants are accessing nutrients from a rock, producing visible differences in as little as two weeks,” says James Jones, a PhD candidate working with Guinel.

Boreal Agrominerals was founded by an organic farmer knowledgeable about geology. He saw agricultural potential in the rock and began selling crushed SRC as a soil amendment. Some farmers reported beneficial effects from applying SRC to plants including asparagus, potatoes and tomatoes. Other farmers who tried it, however, claimed it didn’t do anything.

“Both types of farmers may have been correct,” says Guinel. “We are finding out that it depends on the plant species, the soil and the context of application.”

"You don’t think of a rock being able to provide nutrients to plants, but in the research we’re doing here, we’re seeing that plants are accessing nutrients from a rock, producing visible differences in as little as two weeks."

Growing Plants in a Lab

Jones, who completed a master’s degree in Integrative Biology under Guinel and then moved on to Laurier’s PhD program in Biological and Chemical Sciences, has spent the past several years testing SRC in the controlled conditions of a laboratory growing room and a greenhouse.

“In the work I did for my master’s, it seemed like SRC was having beneficial effects for pea plants, but it wasn’t clear why those benefits were occurring,” says Jones. “For my doctoral dissertation I’ve been working to build on those results and to clarify what benefits occur and why.”

Jones, who is co-supervised by Pedro Antunes from Algoma University, expanded his research to examine wheat as well as pea plants. SRC had an even more noticeable effect on wheat.

“Within about two weeks, we were seeing differences in those sets of plants,” says Jones. “The SRC-treated wheat was growing a lot more and by the end of the 56-day growing period, these plants were dramatically larger in terms of their root biomass, their shoot biomass and eventually their yield.”

Jones’s SRC-treated pea plants didn’t end up much larger, but underground the SRC seemed to facilitate the interaction between plant roots and microorganisms.

“While some of the positive effects of SRC also occur with lime, since both reduce soil acidity, it looks like SRC also has beneficial effects on some types of soil microorganisms, while lime does not,” says Jones.

"If SRC has positive effects nitrogen-fixing bacteria, farmers could reduce the use of chemical fertilizers and rely more on cover crops and bacteria."

Renée Christie, who recently finished her master’s degree in Integrative Biology and is working in the short term as Guinel’s research assistant, investigated the effects of SRC in the lab and in the field. She was part of a larger, multi-university study investigating ways to improve soil in Ontario vineyards and Chinese tea plantations.

Christie’s portion of the project focused on vineyard soils and the effects SRC and commercial fertilizers had on nitrogen-fixing bacteria, which convert atmospheric nitrogen into a form plants can use. Nitrogen is another essential component of fertilizer.

“Because chemical fertilizer has adverse implications for the soil and the environment, we wanted to look at biological ways to fix nitrogen,” says Christie. “If SRC has positive effects nitrogen-fixing bacteria, farmers could reduce the use of chemical fertilizers and rely more on cover crops and bacteria."

Christie’s findings were mixed. When she used SRC on potting soil in a greenhouse setting, the quantity of nitrogen-fixing bacteria increased. In the field, she found that the season and the types of cover crops had a greater influence on the bacteria than either SRC or commercial fertilizer.

Christie obtained the best results when alfalfa and chicory were planted together or when red clover and oilseed radish were combined. Legumes, such as alfalfa and red clover, are excellent hosts to nitrogen-fixing bacteria, while chicory and oilseed radish have large tap roots that can grow deep. Combining crops with complementary root systems may allow plants to better “mine” nutrients from the soil.

“We think that the differences in the root architecture are the basis for the different effects of SRC on the crops,” says Guinel. “Plants with very diffuse root systems, such as wheat, are likely more effectively mining the nutrients provided by SRC, while SRC may be having positive effects on nitrogen-fixing bacteria associated with legumes.”

“I’m very proud of my students. I always want them to look at what they did with pride, and Renée and James certainly can. The work is never complete but they have found pieces of the puzzle that can be set among others.”

As their time researching SRC draws to a close, Guinel, Jones and Christie are all looking forward to new chapters in their lives. Christie has secured employment as a research associate in plant pathology at a company that focuses on sustainable approaches to farming. She will soon be moving to Vancouver to start her new job.

Jones plans to defend his doctoral dissertation in early September. He isn’t entirely sure what’s next but depending on career opportunities, he may also move to British Columbia, where he grew up.

Guinel is retiring in August after wrapping up a research project on pea mutants she has been working on with a group of undergraduate students. Christie and Jones are among her last graduate students and the closeness between the three is evident in the way they finish each other’s sentences.

“I’m very proud of my students,” says Guinel. “I always want them to look at what they did with pride, and Renée and James certainly can. The work is never complete but they have found pieces of the puzzle that can be set among others.”

“Frédérique is a blessing,” says Christie. “She sees us as people…”

“…Not just as producers of scientific commodities,” says Jones. “With the amount of feedback and support she provides, you can grow a lot.”