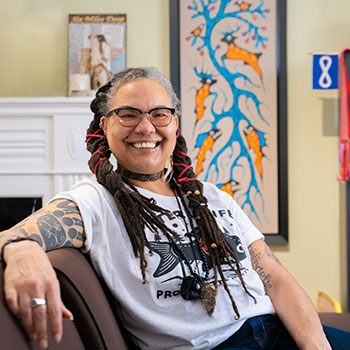 Most Canadians have some degree of awareness about Canada’s diverse Indigenous and Black communities. However, many know little about mixed Indigenous-Black communities and some may not even know they exist. Ann Marie Beals is working to change that.

Beals, a first-year Wilfrid Laurier University PhD student of community psychology, is of African Nova Scotian and Mi’kmaq descent. Growing up, they felt that their community was unrecognized, even erased, in Canadian society. Today, they are working to bring Indigenous-Black voices to the fore.

One of 26 Laurier master’s and doctoral students receiving a total of more than $1 million in funding through Social Sciences and Humanities Research Council of Canada (SSHRC) Talent Grants, Beals is receiving a Joseph-Armand Bombardier Canada Graduate Scholarship worth $105,000 over three years. The funding will allow them to continue their research into the Indigenous-Black experience in Canada and how to integrate that experience into high school curricula.

“The funding lets me focus on my research and gives me opportunities I might not otherwise have, such as the ability to travel between Ontario and Nova Scotia, since my research focuses on both places,” says Beals. “It puts me in a position where I can do my research the way I want to do it – with communities, in ways that are respectful, transformative and empowering.”

The Path to Postsecondary Education

Beals, a mature student, didn’t come from a family where attending university was an expectation. They entered the workforce after high school, working at a bank and as an entrepreneur. Beals later became a student support worker at a school board, working with African Nova Scotian and Mi’kmaq youth. Their experience in that position propelled them to further their education.

While completing their Bachelor of Arts in psychology, Beals focused on factors that help people from marginalized groups succeed, particularly in post-secondary education. After the youngest of their own three children entered university, Beals felt ready to make the move to Waterloo to deepen their research. They began working toward a master’s in community psychology under Laurier Assistant Professor Ciann L. Wilson, who is also their doctoral supervisor.

As part of the Proclaiming Our Roots project, which was led by Wilson, Beals played a major role in gathering Indigenous-Black people’s stories and sharing their experiences and knowledge in arts-based forms such as digital storytelling.

For their doctoral work, Beals plans to take the stories and videos created for the project and turn them into high school curriculum tools with an accompanying module guide to teach students about the Indigenous-Black experience and history in Canada.

It’s not clear just how many Indigenous-Black people there are in Canada, but Beals says communities arose out of several waves of Black migration to Canada, including those accompanying the American Revolutionary War and the War of 1812.

“In these two particular cases of forced or coerced migration, the British government said, ‘If you fight for us against the Americans, we’ll give you your freedom, land and what you need to start a new life.’ So a lot of African Americans came to Nova Scotia and also to southern Ontario and other parts of Canada,” says Beals.

“With the arrival of Mathieu Da Costa in 1604, the enslaved people who were brought in with the building of the French fortress of Louisbourg in the early 1700s, freedom seekers coming through the Underground Railroad, and the Maroons arriving in the late 18th century from Jamaica, peoples of the African diaspora have been in Nova Scotia for a very long time, as enslaved and free peoples.”

Beals notes that the Mi’kmaq have been stewards of their land, Mi’kma’ki, for more than 13,000 years.

“Regardless of treaties signed in the 18th century, Mi’kmaq land was taken and not ceded, and the Mi’kmaq were relegated to reserves,” says Beals. “For the most part, African Nova Scotians were settled around these Indigenous communities. This was not the best land for survival, nor was there consideration that this land was unceded Mi’kma’ki territory.”

Geographic closeness may not have been the only factor resulting in intermingling of the two groups.

“When you have two oppressed communities, there’s some natural gravitation to bond together,” says Beals. “There are communities of Indigenous-Black people throughout Canada, including in Quebec and out West, as well as families descended from Indigenous people and people who arrived more recently from the African continent, from the Caribbean, and as African-American immigrants.”

Though Indigenous-Black people have diverse backgrounds and experiences, what many have in common is a desire to see themselves and their communities recognized, represented and celebrated, says Beals.

“There’s an erasure that has happened because of colonial hierarchies that determine where you stand as a member of society,” says Beals. “Recognizing the lives of Indigenous-Black people in curricula will assist in our self-determination and locating our place in Canadian society.”

One of the recipients is Lindie Liang, assistant professor of organizational behaviour and human resources management at the Lazaridis School of Business and Economics. Liang will research dysfunctional leadership and its effects on supervisors and employees over time.

“This grant enables me to collect new data, answer some important questions and support graduate students,” said Liang, who is receiving $62,000 over two years.