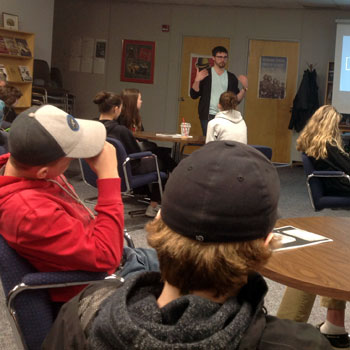 The students in a Grade 10 Canadian history class at Stratford Northwestern Secondary School had the chance to learn history in an entirely new way during the past school year. Not by reading from textbooks, but by examining decades-old records.

With the help of Wilfrid Laurier University historians from the Laurier Centre for Military, Strategic and Disarmament Studies (LCMSDS), the students sifted through service records, pension files and local archives to learn about the lives of First World War veterans. They wrote about nine of those veterans – eight soldiers and one nurse – all from the Stratford area. Their biographies have been published on the centre’s Through Veterans’ Eyes website.

“How do you deal with source information that’s not from your time period?” says Christine Ritsma, teacher of the Grade 10 class. “The students had to learn how to problem solve. They had to be tenacious. Some of the work was in cursive and they don’t write in cursive. Sometimes we had to get magnifying glasses out to read it."

“It’s about taking the time to see what we can gather from this, what it tells us about our community and what it can tell us about the people who went to fight.”

The pension records, acquired from Veterans Affairs Canada and digitized by Laurier students through a Social Sciences and Humanities Research Council Insight Grant awarded to professors Mark Humphries, Terry Copp and Cynthia Comacchio, shed light on the health and everyday lives of veterans, the challenges encountered due to disability and military service, and how they were treated by Canada’s pension system. Though the pension files were partially redacted to protect the privacy of individuals mentioned within them, the students paired these records with service files available online through the Library and Archives Canada and documents from Stratford’s own archives, painting a detailed picture of the health and everyday lives of these veterans.

Eric Story, who is studying toward his PhD in history at Laurier, helped the class interpret the files, which are full of medical jargon and acronyms, and write these veterans’ biographies. He also met with students throughout the project to give lectures and answer questions. Story has been working with the pension files since he started his master’s degree in 2015 and is now using them to help inform his dissertation, which focuses on the history of tuberculosis during the 1800s and 1900s.

Laurier’s collection of pension files represents one of the richest sources of information available about Canadians living during the first half of the 20th century. It is made up of more than 200,000 records from Canadian officers and enlisted men, Canadian wartime nursing sisters, as well as a few thousand pension records of veterans from Allied nations who immigrated to Canada after the war. One of the main reasons the files are so detailed is because pension officers checked up on veterans frequently and asked invasive questions.

“The system functioned on the idea that pensions would compensate only for war-incurred disabilities that prevented veterans from working to a certain degree. So in the files you’ll see ‘50% disabled’ or ‘30% disabled.’ If you’re 30% disabled, you would be compensated for a 30% loss in income,” says Story.

“As much as it’s morally conflicting to read these files, they tell us so much, about relationships between men and women and between parents and children, where people are working, how much money they’re making and how disabilities affected their lives.”

These details formed the basis of the students’ biographies. Of the nine veterans, several had suffered gunshot wounds, one had been injured by an exploding mine and another was killed by a toxic gas attack. Malaria, syphilis, cancer, pneumonia, alcoholism, influenza and epilepsy were also documented. Some of the veterans were desperately poor and several worked in the trades. One was a butcher and another was a lawyer who owned his own company (John Inglis and Company, now Whirlpool Canada).

The amount of detail recorded over the years meant Ritsma’s students could really get to know the veterans’ stories, though they were often shocking or sad.

“The local aspect was really important for the students, too,” says Story. “They were able to visit some of the houses that the soldiers were living in at the time and they went to the cemetery and saw the gravesites of some of these people. It was a meaningful experience for them.”

Next May, the Centre for Military Strategic and Disarmament Studies will invite historians from across the country to present their findings and interpretations of the pension files. Those findings will then be collected and submitted as a book for publication later in the summer.

The students’ biographies can be read online as part of the centre’s Through Veterans’ Eyes website.