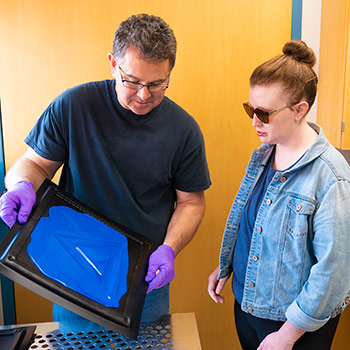 Wilfrid Laurier University student Hillary Scanlon is a hands-on kind of person. But when it comes to putting her waste or recycling in the proper disposal receptacles on campus, Scanlon says that is a process she would like to keep hands off.

Scanlon has opsoclonus-myoclonus syndrome (OMS), a rare neurological condition that makes her legally blind. In OMS, the eyes are subject to rapid, multi-directional movements, which make it difficult for the brain to process visual information or establish a field of vision. She has little residual vision and can’t find the waste or recycling units on Laurier’s Waterloo campus, much less decipher between the recycling, garbage or compost streams. Instead, she disposes of her garbage when she gets home.

“Garbage and recycling units are not equipped with Braille labels,” says Scanlon, who is taking lessons to learn the alternative alphabet. “But even if they were, who wants to or should have to, interact with garbage and recycling? That’s just gross.”

To make waste, recycling and compost units accessible (and sanitary) for people with vision loss, Scanlon has created a series of rubber floor signs. The surface of the signs, different from the rest of the area flooring, makes them detectable by cane, foot or sight, alerting passers-by that they are near a disposal unit.

The signs were created in the Science Maker Lab with the assistance of Science Entrepreneurship program coordinator Ron Daniels. Scanlon will test her prototypes at the waste receptacles in the Science Atrium and the Concourse on Laurier’s Waterloo campus during the week of July 9. She encourages students, faculty and staff to interact with the floor signs and provide feedback via email.

From Classroom to Community Collaboration

Scanlon’s idea for the inclusive signage began in an introductory course, Perspectives on Sustainability, with Associate Professor Manuel Riemer. One of his graduate students led a classroom quiz on recyclable and organic materials.

“I got all of the questions right but I remember thinking to myself, ‘none of this matters because I can’t use the receptacles.’”

At the end of class, the environmentally conscious Scanlon asker Reimer for suggestions about how she could properly dispose of her food and beverage waste on campus.

“I was hoping he would have an easier answer for me,” jokes Scanlon, a Global Studies major, of Reimer’s suggestion that she investigate accessible recycling solutions as a course project.

Scanlon had a few ideas to make the receptacles more accessible and inclusive. But she has only been blind for two years and felt wrong assuming that what would work for her, would also work for anyone else with vision loss.

“A big part of social entrepreneurship (SE) is asking questions rather than saying, ‘this is your answer,’” says Scanlon, further developing the project through a senior-level course in Laurier’s SE option. “I wanted key stakeholders involved in the project from the beginning.”

She applied to the Sustainable Hawk Fund in May 2017 and received $4,500 in funding to organize four design labs (collaborative brainstorming sessions) with a stakeholder group and develop an initial prototype.

Her stakeholder group includes representatives from Clean River Recycling Solutions (the manufacturer of Laurier’s garbage and recycling receptacles), the Canadian National Institute for the Blind (including cane and guide dog users, and clients who use their residual vision to navigate), staff and custodians from Laurier’s Physical Resources department, and fellow students in the social entrepreneurship option.

What started out as a course assignment for Scanlon was developing into a true social venture. Aptly named, Sustainability Through an Inclusive Lens (STIL) could possibly change how Laurier’s community members viewed and disposed of waste and recycling on campus.

Scanlon wanted to make a bigger impact with her project, one that would educate more than just the end user of a smartphone application.

“There is nothing wrong with apps for people with vision loss, but they are a solution useful only to people with that experience,” she says. “Apps don’t always educate the rest of the community about accessibility or make the environment any more inclusive.”

For Scanlon, apps designed for people with vision loss tend to align with the medical model of disability, which places the onus on those with the impairment to adapt and conform to an inaccessible and exclusive environment. She also feels smartphones are a privileged commodity that not everyone can afford. Instead, Scanlon developed her prototype in accordance with the social model of disability, which advocates for changes to both the physical environment and attitudes on ability. It’s a concept explored throughout the SE option and one she has discussed at length with project mentor Edmund Pries, assistant professor in the departments of Global Studies and Religion and Culture.

Outside of Laurier’s Waterloo campus, Scanlon will test her prototype at CNIB’s Hub in downtown Toronto July 19-20 to gather feedback from an audience directly impacted by her concept. Revisions to the prototype, if required, will be made during late summer before the project rolls out across Laurier’s Waterloo and Brantford campuses this fall. Laurier’s Student Life Levy has provided Scanlon with more than $30,000 to implement the project.

Scanlon has also been in contact with Accessibility for Ontarians with Disabilities Act officials and hopes her project can be included in a future amendment.

“People with vision loss aren’t just at Laurier,” says Scanlon. “We are everywhere, and things are only accessible if they are everywhere.”

Scanlon welcomes feedback on the floor sign prototypes from sighted individuals and those with vision loss. She can be reached at info@stilsolutions.ca.