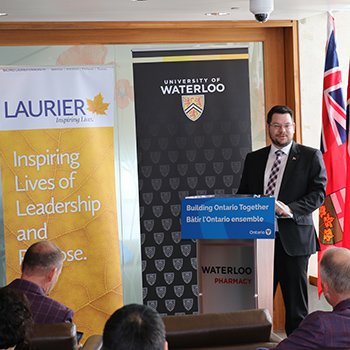 “Laurier researchers tackle some of the most complex issues facing our society today, and this funding will directly support and enhance those efforts,” said Jonathan Newman, Laurier’s vice president: research. “We are grateful to the Government of Ontario for this substantial investment in Laurier’s world-class research.”

The funding awarded to Jones, director of the Laurier Centre for Cognitive Neuroscience, supports the purchase of a functional near-infrared spectroscopy system, which is brain imaging technology that measures oxygen in the blood at particular locations in the brain. The equipment will help Jones, his students and colleagues understand how the brain organizes speech and could be applied to helping patients with communication challenges including strokes, Parkinson’s disease and autism spectrum disorder. The system could also be used for research on memory, detecting drug impairment and understanding how the brain processes music.

Kheyrollah Pour’s research group recently travelled to Great Bear Lake in the Northwest Territories to study the effects of climate change on Arctic lake ice. Provincial funding supported the purchase of an underwater remotely operated vehicle that can travel up to 200 metres below the surface to collect samples and capture detailed imagery. Kheyrollah Pour’s team aims to understand what is happening under the ice during increasingly short and variable winters as global temperatures climb. Canada’s North is warming at nearly three times the average global rate.

The funding awarded to Riemer will support a “living lab” in Waterloo’s Evolv1 building, Canada’s first net-positive energy and carbon neutral commercial multi-tenant office building. Riemer is director of Laurier’s Viessmann Centre for Engagement and Research in Sustainability, located in EvolvGREEN, an innovation hub within the Evolv1 building. While it is often assumed that green buildings improve the well-being and productivity of employees working in them, previous research, including a study by Riemer and his colleagues, found that this assumed positive effect is not always the case. He and his research partners are investigating how to close the green building performance gap.

Sanders’ Craft of Intelligence Analysis Lab will simulate a criminal intelligence analysis unit in order to explore the growing role that data analytics and technologies play in public safety and security industries, along with associated ethical and civil rights issues. Because conducting studies using real crime and real intelligence analysis units is difficult due to privacy and security concerns, practicing analysts, who vary widely in their backgrounds and job descriptions, will be brought into the lab to work on fictional but representative scenarios. In addition to being recorded as they work, the analysts will be interviewed after completing the scenarios.