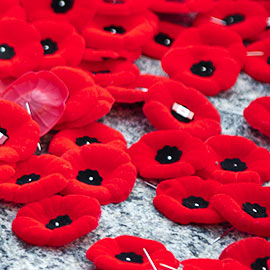 The following Laurier experts are available to speak about topics related to Remembrance Day:

Kandace Bogaert is an assistant professor and Cleghorn Fellow in War and Society in the Department of History at Wilfrid Laurier University. She is an expert on the history of health and disease, especially during the First World War. She has studied soldier deaths by flu and suicide during the Great War, as well as the long-term consequence of war trauma. Contact: kbogaert@wlu.ca or 519.884.0710 x4944.

Tarah Brookfield, associate professor in Youth and Children’s Studies and History, is an expert on Canadian women’s political activism and child welfare work in the 20th century, particularly their mobilization for women’s rights and children’s safety during the World Wars and Cold War. Contact: tbrookfield@wlu.ca or 519.756.8228 x5792.

Cynthia Comacchio, professor in Laurier’s Department of History, is an expert on the sociocultural impact of war in Canada and veterans’ social reintegration after the First World War. She is also available to comment on war commemoration efforts, including memory and public memorialization. Contact: ccomacchio@wlu.ca or 519.884.0710 x3422.

Peter Farrugia, associate professor in Laurier’s History and Society, Culture and Environment programs, is an expert on 19th- and 20th-century Britain and France, particularly the study of war and peace. Farrugia is available to comment on history and memory as it relates to the First World War. Contact: pfarrugia@wlu.ca or 519.756.8228 x5707.

Mark Humphries, associate professor in Laurier’s Department of History, Dunkley Chair in War and the Canadian Experience and director at the Laurier Centre for Military Strategic and Disarmament Studies, is an expert in Canadian military history, the First World War and war, trauma and health. Contact: mhumphries@wlu.ca or 519.884.0710 x3309.

Roger Sarty, professor in the Department of History, is an expert in Canadian military history, Canadian foreign and defence policy, as well as the history of the First World War and Second World War. He has served as senior historian at the Department of National Defence and deputy director of the Canadian War Museum. Contact: rsarty@wlu.ca or 519.884.0710 x2287.

The Laurier Centre for Military, Strategic and Disarmament Studies

The Laurier Centre for Military, Strategic and Disarmament Studies (LCMSDS) fosters research, education and discussion of historical and contemporary conflict. Several professors are affiliated with the centre, including Mark Humphries, the centre’s director; Professor and Director Emeritus Terry Copp; and Assistant Professor Kandace Bogaert, but many current and former doctoral students are also involved in research through the centre:

Kyle Falcon is a recent graduate of the PhD in History program and book review editor of Canadian Military History. His research focused on British spiritualism and psychical research in the aftermath of the Great War, examining the ways in which a section of British society attempted to unite science and religion, end human conflict and redeem the war’s bloodshed by conversing with the spirits of fallen soldiers. Broadly, he is interested in modern European history, the British Empire, war and society, the history of science and the history of religion. Read more about his research. Contact: kyle.falcon@canadianmilitaryhistory.ca.

Katrina Pasierbek is a PhD student in the Department of History and the archives manager at LCMSDS. Her research focuses on remembrance and commemoration of the First World War overseas. She also leads battlefield study tours of First and Second World War battlefields and memorials in France and Belgium. Previously, she worked in the museum and heritage field as an education coordinator and exhibit researcher. Most notably, her research is featured in Canadigm’s Souterrain Impressions, a First World War exhibit currently touring Canada. Read more about her research. Contact: katrina.pasierbek@canadianmilitaryhistory.ca.

Lyndsay Rosenthal is a graduate of the PhD in History program and the research manager and grants crafter at the LCMSDS. Her dissertation focused on sexuality and the treatment of venereal disease in the Canadian Expeditionary Force during the First World War. Contact: lrosenthal@wlu.ca.

Eric Story is a PhD student in the Department of History and the outreach manager at LCMSDS. He is studying the history of tuberculosis in the 19th and 20th centuries of Canada and has also written about the First World War and its aftermath in both Indigenous and settler communities in Canada. Over the past year, he has been helping a Grade 10 class in Stratford sift through service records, pension files and local archives to learn about the post-war lives of First World War veterans. Read more about that project. Contact: eric.story@canadianmilitaryhistory.ca.

Learn more about the Laurier Centre for Military, Strategic and Disarmament Studies.