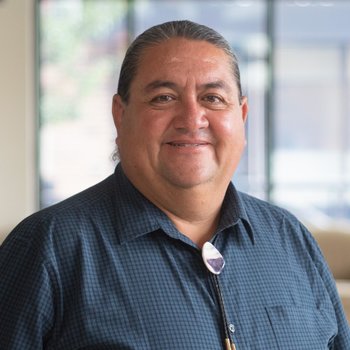 Brantford – Building a better relationship between Canadians and Indigenous people in the future starts with understanding the past, which is the focus of the Friends and Neighbours lecture Jan. 16 at Wilfrid Laurier University’s Brantford campus. The free public lecture features Darren Thomas, a lecturer in the Indigenous Studies program at Laurier’s Brantford campus and a PhD candidate in community psychology.

"Efforts to work towards reconciling the past relations between the Crown, Canadians and Indigenous peoples will be a challenging and cumbersome journey," said Thomas, who is from the Seneca Nation, a member of the Bear Clan and lives at the Grand River Territory of the Haudenosaunee. “Many Canadians wonder why Indigenous people can't find a rightful place in today's society and ‘just move beyond the past’. The reason is that the impacts of colonial trauma still control many lives of Indigenous people."

His interactive talk, titled “Seven Generations,” will challenge and empower the audience and encourage a commitment to strengthening relationships so all people can enjoy a safe, fair and just society for generations to come.

The lecture is the fourth talk in the 2018-2019 speaker series presented by the Friends and Neighbours, a grassroots committee of volunteers supporting the Woodland Cultural Centre's Save The Evidence Campaign.

The series, titled “Revealing the Truth,” aims to educate people and promote a community dialogue about the former Mohawk Institute Indian Residential School and reconciliation. The Mohawk Institute, on Mohawk Street in Brantford, operated as a residential school from 1828 until its closure in 1970.

Two additional lectures will round out the 2018-19 series:

Save the Evidence is a capital campaign to raise awareness and support for the repair and renovation of the Mohawk Institute building. Its goal is to ensure the physical evidence of the dark history of residential schools in Canada is never forgotten.

After its closure in 1970, the former Mohawk Institute reopened as the Woodland Cultural Centre, which operates as a museum, gallery, and cultural hub for indigenous history, language, education, art, and contemporary culture. The Save the Evidence campaign has received support from Six Nations Elected Council, the City of Brantford and the Province of Ontario, as well as from individuals and organizations.

The “Seven Generations” lecture will take place Wednesday, Jan. 16 at 7 p.m. in the Research and Academic Centre, room RCE004, at 150 Dalhousie St. in Brantford. For more information, contact Rob Knechtel, vice-chair of Friends and Neighbours at 519-861-5330 or friendsandneighbours@email.com.