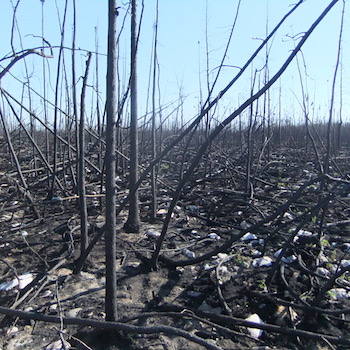 Waterloo – Carbon stored for centuries in the soils of boreal forests will be released by more severe and frequent wildfires as the climate warms, according to a paper recently published in the prestigious journal Nature. The paper, co-authored by Wilfrid Laurier University Associate Professor Jennifer Baltzer, finds that extreme fires are both caused by and contributing to climate change.

The research, led by researchers at Northern Arizona University, was conducted in the Northwest Territories, which in 2014 suffered its largest fire season in recorded history. Laurier has a longstanding research partnership with the Government of the Northwest Territories (GNWT), which was recently renewed for another decade. The partnership provided logistical support for the Canadian-American team of scientists to examine how the severe fires affected forests. The GNWT, Natural Sciences and Engineering Research Council of Canada (NSERC) and NASA were among the funders of the project.

“After the fires, the Northwest Territories government realized it needed to understand the impacts of extreme wildfire on lands and people so it could better plan and adapt,” said Baltzer, who is Canada Research Chair in Forests and Global Change. “This research, with the help and partnership of the GNWT, has really advanced our understanding of these fires and the tremendous impact extreme wildfires have on globally critical stores of carbon.”

The researchers worked in hundreds of forest and wetland plots across the Northwest Territories, collecting vegetation and soil samples to determine what had been present before the 2014 fires and how conditions changed thereafter. The research confirmed that the 2014 fire season in the Northwest Territories was a globally significant event, burning 2.85 million hectares of forest and releasing an estimated 94.5 megatonnes of carbon. This is equivalent to half the carbon sequestered annually across Canada, largely by boreal forests.

“Between fires, boreal soils accumulate carbon and, under normal circumstances, only some of this carbon is released when the forests experience the next fire,” said Baltzer. “This explains why the boreal forest has historically been a globally significant carbon sink. However, more extreme fires can burn very old layers of carbon, turning boreal forests that have acted as carbon sinks for millennia into sources of greenhouse gas.”

“Understanding the fate of this legacy carbon is really important in the context of atmospheric greenhouse gases and the Earth’s climate,” said Merritt Turetsky, an associate professor of Integrative Biology at the University of Guelph and another member of the research team. “The loss of this important carbon storage function has the potential to directly impact global climate and is another positive feedback to warming not currently considered in global models.”

The researchers found that younger forest stands were particularly vulnerable to the loss of legacy carbon. In older stands, this carbon remained protected. But in stands younger than 60 years old, it burned.

“Globally, boreal forests store about one-third of terrestrial carbon, primarily in soils, so transferring that carbon from soil to the atmosphere could be a powerful accelerating feedback to climate warming,” said Michelle Mack, also of Northern Arizona University.

“The frequency of boreal forest fires is projected to increase even more with expected climate warming and drying, and as a result total burned area is expected to increase 130-350 per cent by mid-century,” the authors write in their paper.

“The relationships that have been built between forest managers and researchers since the 2014 forest fire season have helped improve our understanding and interpretation of what the fire environment is,” said Richard Olsen, manager of fire operations for the GNWT’s Department of Environment and Natural Resources. “That has given us a good groundwork for making better decisions in the Northwest Territories.”