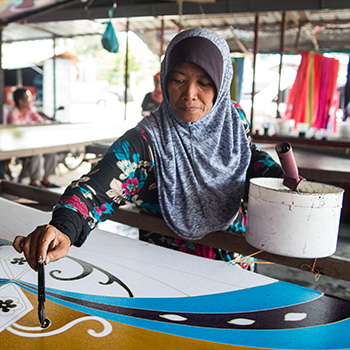 BRANTFORD – Wilfrid Laurier University alumna Shazlin Rahman (BA ’11) is returning to Laurier’s Brantford campus Oct. 16 to host a screening of the documentary, Her Sarong. Co-created with filmmaker Asad Chishti, the film follows Rahman’s journey to Malaysia to retrace her late grandmother’s roots and explore the art of making batik sarongs in Malaysia.

“I wanted to bring the screening to Laurier because it's where I had some of my formative years in Canada; it's where I found my love for writing and storytelling,” said Rahman, who graduated from the journalism program at Laurier’s Brantford campus.

Rahman is on a personal journey to collect stories and artifacts about her grandmother, whom she considers a significant role model. In December 2017, Rahman travelled back to Malaysia for the first time in seven years. Accompanying her for part of the trip was Chishti, who connected to Rahman’s search for her grandmother’s wisdom.

“I hope people will learn to listen and appreciate the older people in their lives, but also look at themselves as grandparents-in-training, not just biologically but especially around how our decisions and choices today are going to affect two generations down the road,” said Chishti.

Rahman almost didn’t recognize the east-coast Malaysian neighbourhood where her grandmother, Mok, had lived and where Rahman spent much of her childhood. Since her last visit, new infrastructure had shaped the area to become almost unrecognizable.

At her home, Mok and her three daughters – one of whom is Rahman’s mother – worked on making batik sarongs. Rahman explained that her grandparents grew up in poverty and raised their daughters in poverty. Mok took on many different jobs to supplement the family income, one of which was painting batik sarongs, which is a cottage industry in Malaysia.

“My grandmother was able to make surplus income that eventually helped them break out of the cycles of poverty that the family had grown up with,” said Rahman. “That's why this project is such a personal thing, and it's deeply anchored in the Malay batik sarong because it is the work that eventually helped my family break their generations-long poverty.”

Rahman and Chishti spent a week speaking with and filming those working in the batik sarong industry.

“I started this project to archive my grandmother's life because I was looking for a role model and a guide to how I navigate myself as a woman of colour,” said Rahman. “I went back and found a lot of that in my grandmother's life, but I also found a lot of that in the women that I interviewed. There was a lot that I took back with me – their resilience and their strength and the beauty that they put into their craft as batik makers and also as Malay Muslim women.”

The screening of Her Sarong will be held Oct. 16 from 6 p.m. to 8 p.m. in the Carnegie Building, room CB100, and is open to students, staff, faculty and community members. The screening will be followed by a discussion with Chishti and Rahman, moderated by Digital Media and Journalism Program Coordinator Bruce Gillespie.

The event, organized by the Faculty of Liberal Arts and Development and Alumni Relations, is free or pay what you can.