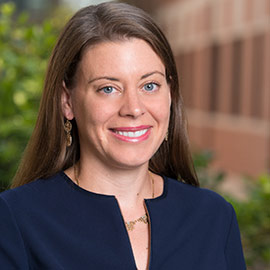 Waterloo – For the second time this year, an Ebola outbreak is raging in the Democratic Republic of the Congo (DRC). Now a Wilfrid Laurier University researcher is working with partners in the DRC and elsewhere on a project focused on using data to inform the current response and also to improve responses to future epidemics.

Karen Grépin, who is Canada Research Chair in Global Health Policy and Evaluation and associate professor of Health Sciences at Laurier, is co-leading the project with Serge Mayaka, a medical doctor, health economist and senior lecturer with the Kinshasa School of Public Health at the University of Kinshasa in the DRC. The project also includes partners at the University of British Columbia, the United States and Belgium, as well as graduate students and postdoctoral researchers in Canada and the DRC.

The project focuses on integrating routine health information into responses to Ebola and other epidemics. Though it may be less obvious than bringing in doctors or drugs, data is an important tool in responding to public health emergencies.

“Getting ahead of an outbreak and managing an outbreak is really about knowing what’s going on everywhere,” said Grépin. “Research from previous outbreaks has shown that health systems can be quickly undermined in public health emergencies and that more people can suffer from secondary health effects from avoiding or not being able to access health services than the outbreak itself.”

“This research aims to understand, through routine data, the impact of the Ebola epidemic on the use of health services and on the performance of the health-care system during and after epidemics,” said Mayaka. “We are also looking into how data is used and shared by different actors during crises and if there are obstacles to the use of this data.”

The team received a $360,000 project grant from the International Development Research Centre (IDRC), Canadian Institutes of Health Research (CIHR), and Social Sciences and Humanities Research Council (SSHRC). Grépin is also putting toward the project some resources from a related grant from the AXA Research Foundation, the scientific philanthropy arm of a French multinational insurance company.

The DRC has been through several Ebola outbreaks, including one last year and one earlier this year in the north and west of the country. Unlike the slow international response to the outbreak that killed more than 11,300 in West Africa between 2013 and 2016, the responses to these outbreaks were rapid and effective, limiting deaths to four in the 2017 outbreak and 33 in the earlier 2018 outbreak.

“There is no country that is more prepared and experienced in handling Ebola outbreaks than the DRC,” said Grépin.

However, the response to the current outbreak in North Kivu province, in the eastern part of the country, has been complicated by the conflict in that area. Ebola deaths there now surpass 200. Grépin and her colleagues are investigating whether additional people have died or suffered negative health consequences because conflict-related instability, fears about the epidemic or shuttered health facilities prevented them from seeking medical care for reasons such as childbirth or non-Ebola diseases, as happened in the West African outbreak.

“We’re looking into if that’s happening in the DRC now, what we can learn and if any of the activities that their Ministry of Health is implementing, such as a free health care policy in the affected areas, are having any effect,” said Grépin.

Though the project is just getting started, Grépin is looking forward to working with her colleagues on research that could end up saving lives.

“It’s an exciting opportunity that brings together so much of what I’ve been working on for years,” said Grépin. “These outbreaks are not going to go away so we’re going to need to know more about how to respond effectively. I’m really looking forward to having a part in that.”