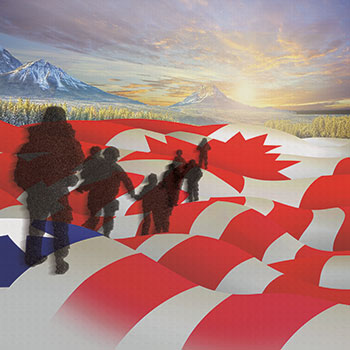 Is Canada a safe haven for U.S. war resisters? Laurier lecture and documentary to explore the cost of peace

Is Canada a safe haven for U.S. war resisters? Laurier lecture and documentary to explore the cost of peace

WATERLOO – Wilfrid Laurier University’s International Migration Research Centre will host a lecture and documentary screening on American war resisters from the Vietnam war and the war in Iraq, Friday May 4 from 7 p.m. to 9 p.m. at the CIGI Auditorium on Erb Street in Waterloo.

“This documentary is about how people from the strongest military power needed Canada and Canadians to resist war,” said the film producer and Laurier Professor Alison Mountz. “This topic matters now more than ever. We can learn from the past at a time when we need to understand what role Canada will play when people are seeking a safe haven from the U.S.”

The event, entitled “Canada as Safe Haven? The Migration of War Resisters from the United States,” features a short screening of the documentary-in-progress Canada as Safe Haven? by director Lisa Molomot. The film is based on Mountz’s research into the topic. The event will also feature a keynote address and panel of people featured in the film.

“The film brings history to life to share living memories that draw audiences into worlds they may not have experienced first-hand,” said Mountz. “This film demonstrates that in modern history there is civilian resistance to one of the strongest military powers in the world; that some of this resistance comes from American soldiers and citizens themselves; that the resisters need Canadian civil society and policy to succeed; and that members of civil society must learn from the past in order to be cognizant, informed national and global citizens.”

The keynote address will be led by John Hagan, professor of Sociology and Law at Northwestern University, who is a Vietnam war resister and the renowned author of Northern Passage: American Vietnam War Resisters in Canada. Hagan’s lecture “How American's Have Remembered to Forget: Canada, Collective Memory and America's Forever Wars” will be followed by a panel featuring Molomot, the Honorable Joseph Bovard and others involved in the War Resister Support Campaign.

“Peace is important for everyone, though it is hard to achieve,” said Bovard. “This conference will feature persons who chose peace over war; how they did it and what the consequences are.”

Attendees will also be able to view an art exhibit of war resistance posters based on the recent War Resister Support Campaign. The event will be followed by a full-day workshop May 5 from 9 a.m. to 3 p.m. at the Balsillie School for International Affairs. War resisters, activists and researchers will share histories and strategies to document these histories across generations of war resister migration to Canada.

“The goal of the event is to bring resisters from the Vietnam war and the Iraq war together and for them to share their stories of starting over,” said Mountz.

This event is funded by Wilfrid Laurier University, a Social Sciences and Humanities Research Council (SSHRC) Connection Grant and the Balsillie School of International Affairs.

Mountz is a Canada Research Chair in Global Migration and is a leading researcher on the topic of refuge and asylum in Canada. Her current SSHRC-funded research takes a unique perspective on asylum, exploring the stories of American refugees in Canada. Her research documents the oral histories of American civilians and soldiers from the Vietnam War and the war in Afghanistan and Iraq who were both successful and unsuccessful at gaining status in Canada. Read more about Mountz’s research.

The event is free and open to the public. Register for the event as space is limited.